The Armed Forces of Turkmenistan (Turkmen: Türkmenistanyň Ýaragly Güýçleri) is the national military of Turkmenistan, consisting of the Army, Air Force and Air Defense Forces, Navy, Border Troops, Internal Troops and a National Guard. After the fall of the Soviet Union, significant elements of the Soviet Armed Forces Turkestan Military District remained on Turkmen soil, including several motor rifle divisions. In June 1992, the new Russian government signed a bilateral defence treaty with Turkmenistan, encouraging the new Turkmen government to create its own armed forces but stipulating that they were to be placed under joint command.[5]

The Library of Congress Country Studies said that 'the Treaty on Joint Measures signed by Russia and Turkmenistan in July 1992 provided for the Russian Federation to act as guarantor of Turkmenistan's security and made former Soviet army units in the republic the basis of the new national armed forces. The treaty stipulated that, apart from border troops and air force and air defense units remaining under Russian control, the entire armed forces would be under joint command, which would gradually devolve to exclusive command by Turkmenistan over a period of ten years. For a transitional period of five years, Russia would provide logistical support and pay Turkmenistan for the right to maintain special installations, while Turkmenistan would bear the costs of housing, utilities, and administration.'

The Centre for Analysis of Strategies and Technologies's Moscow Defence Brief said that '..[i]n 1992-1993 Turkmenistan attempted to create a small national armed force based on the former 52nd Army (Soviet Union), which was located in the country and depended on support from Russia. Of the 300 formations and units, numbering 110,000 people, 200 were transferred to the command of Turkmenistan, 70 remained under Russia's jurisdiction, and 30 were either withdrawn or demobilized.[6]

Turkmenistan consistently has refused to join multilateral CIS military groupings, but Russia maintains joint command of the three motorized rifle divisions in the Turkmenistani army. Under a 1993 bilateral military cooperation treaty, some 2,000 Russian officers serve in Turkmenistan on contract, and border forces (about 5,000 in 1995) are under joint Russian and Turkmenistani command. Altogether, about 11,000 Russian troops remained in Turkmenistan in mid-1996.'[7] From V.I. Feskov et al. 2013 and Michael Holm's data, it appears that the three divisions were the 58th, 88th, and 209th District Training Centre (former 61 Training MRD) at Ashkhabad.[8]

Jane's Information Group said in 2009 that "Turkmenistan's military is, even by the standards of Central Asia, poorly maintained and funded."[9]

Flag of the Turkmen Ground Forces

Soldier with the flag of the Turkmen Armed Forces 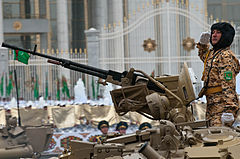 It was reported in January 2007 that on the Caspian Sea and the coastal zone to a depth of 350 kilometers, and on the Turkmen-Iranian border is located about 90% of the Army (22nd Motorized Division on the Caspian coast, 2nd and 3rd motorized divisions on the Turkmen-Iranian border, 11th Motorized Division on the Tajik-Afghan border).[12]

The military ranks have reverted to traditional names and structure, and are now:

The rank of a marshal has also apparently been reintroduced.[13] The real cash payment to the warrior rank in the army is about US$1.5 - 3 (2005 rates) per month. Only some of the conscript's time in the military is occupied with military service, the rest being occupied with "labour" (half a day) and "self-improvement" (2–3 hours a day) by reciting traditional Turkoman texts, learning songs and playing music.

Flag of the Turkmen Air Force

Mi-8s fly near the presidential palace

Flag of the Turkmen Navy

Turkmen naval forces are currently directed by the Border Guard Service and consist of around 700 servicemen and sixteen patrol boats.[23] The Congressional Research Service, citing the International Institute for Strategic Studies, reports a number of six patrol boats.[14]

The International Institute for Strategic Studies reported in 2007 that Turkmenistan intended to form a navy and had a minor base at Turkmenbashy with one USCG Point class cutter and five .[15] Jane's Fighting Ships 2001-2002 reported that the Point-class cutter was the Merjin, PB-129, (ex Point Jackson, 82378), which was transferred on 30 May 2000.

In 2012, Turkmenistan announced its first naval exercises in the Caspian Sea programmed for early September. Named Khazar-2012 (Khazar is the Persian name of the Caspian Sea), these tactical exercises came after a summer of somewhat heightened tensions with Azerbaijan over natural gas fields in a contested part of the sea.[24]

The corps of drums of the Military Institute of the Ministry of Defense of Turkmenistan.