Military doctrine of evasive attacks
This article is about military tactics. For other uses, see Hit and run (disambiguation). 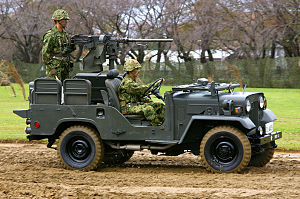 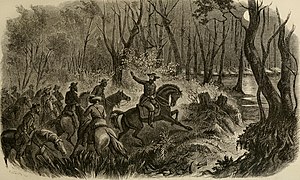 Hit-and-run tactics is a tactical doctrine of using short surprise attacks, withdrawing before the enemy can respond in force, and constantly maneuvering to avoid full engagement with the enemy. The purpose is not to decisively defeat the enemy or capture territory, but instead slowly weaken enemy forces through raids, harassment, and skirmishing, while limiting risk to friendly forces. Such tactics can also expose enemy defensive weaknesses and achieve a psychological effect on the enemy's morale.[1][2]

Hit-and-run is the primary tactic of guerrilla warfare, militant resistance movements, and terrorism, where the enemy typically overmatches the attacking force to the point where any sustained combat is to be avoided.[3] However, regular army forces often employ hit-and-run tactics in the short term, usually in preparation for a later full-scale engagement with the enemy, when and where conditions should be more favorable. Examples of the latter include commando or other special forces attacks, reconnaissance-in-force, or sorties from a fortress, castle, or other strongpoint. Hit-and-run tactics were also where the lightly armed and nearly unarmored horse archers typical of the Eurasian steppe peoples excelled. This holds especially true for such troops that were not part of a large army (such as scouting parties), but it was not unusual to see them employed in such a way even as part of a major force.

Romans first encountered this tactic in the Lusitanian Wars, where Lusitanians utilized the tactic called concursare ("bustling"). It involved charging forwards against the enemy lines, only to retreat after a brief clash or without clashing, which would be followed by more attacks in a similar cadence. Through this way, Lusitanians drove the Roman armies to break formation and chase them, capitalizing on this to lead them to traps and ambushes.[4]

The Seljuk victory over the Byzantine Empire at the Battle of Manzikert was preceded by hit-and-run attacks of Seljuk cavalry[5] which threw the Byzantine army into confusion, which proved fatal once it started to retreat. Similarly, the earlier Parthian and Sassanid Persian horse archers paved the way for their cataphracts' attack that achieved the decisive victories at the Battle of Carrhae and Battle of Edessa. The use of hit-and-run tactics dates back even earlier to the nomadic Scythians of Central Asia, who employed them against Darius the Great's Persian Achaemenid Empire and later against Alexander the Great's Macedonian Empire.[6] The Arab general Baibars also successfully used hit-and-run during the battle of Ain Jalut,[7][8] the first defeat of the quickly expanding Mongol Empire.[9][10] Vastly outnumbered in North America, the French made effective use of hit-and-run raids during the various French and Indian Wars.[11] In the Turkish War of Independence, Turks fought against the Greek Army by hit-and-run tactics before a regular army was set up.[12] Marathas under shivaji and his successors also resorted to hit and run tactics against mughal empire.

In the Vietnam War, Viet Cong forces used hit-and-run tactics to great effectiveness against anti-communist military forces.[13] It has also been used in Afghanistan by rebel forces during the Soviet–Afghan War.[14] Various Iraqi insurgent groups have also used hit-and-run tactics as part of their tactics against Iraqi security forces and American-led coalition forces in Iraq.[15] Improvised fighting vehicles called "technicals" are often used in such operations.

The term "hit-and-run" is also used in economics to describe a firm that enters a market to take advantage of abnormal profits and then leave. These tactics can be seen in a contestable market.