The Armed Forces of South Ossetia is the military of the partially recognised state of South Ossetia. The force consists of 16,000 soldiers: 2500 officers and active-duty soldiers and 13,500 reservists.[1] It includes an Army and an Air Corp.

The South Ossetian Army was formed in 1992, and is the primary defense force in the breakaway republic of South Ossetia, largely considered to be within internationally recognized Georgian territory. 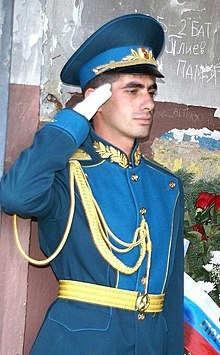 The South Ossetian military fought against the Georgian forces in the 2008 South Ossetia War. At the time of the major Georgian offensive, the bulk of the Ossetian force was concentrated in the settlement of Java to the north of Tskhinvali.[2] According to Centre for Analysis of Strategies and Technologies, what thwarted the Georgian operation in the end was the resistance offered by peacekeepers and lightly armed South Ossetian units that stayed behind to defend the capital.[2] Also Russian regular army forces entered the fighting on August 8 and drove deep into Georgia proper, occasionally accompanied or followed by South Ossetian militia who committed serious human rights violations, particularly in the Georgian villages of South Ossetia.[3]

According one estimate, the losses of the South Ossetian military forces, militia, and volunteers in the war amounted to 150 dead.[4][5] According to a 2012 statement by the President of Russia Vladimir Putin, Russia had been training the South Ossetian militias as part of the Russian General Staff's 2006–2007 plan to rebuff Georgia in case of war.[6]

On 31 March 2017, defence ministers of the two countries signed agreements whereby some units of the armed forces of South Ossetia would go under Russia′s command.[8]

Members of the South Ossetian armed forces during a parade in Tskhinvali in May, 2009

Armoured vehicles during the September, 2009 parade in commemoration of the declaration of independence in Tskhinvali

After the 2008 South Ossetia War, some of the tanks captured from Georgia's forces have been transferred to the South Ossetian military.

A South Ossetian military colour guard during a parade in Donetsk in 2018.

The Guard of Honour company.

There are 2,500 active duty soldiers and 13,500 reservist members within the South Ossetian Army (SOA). Training within the SOA is conducted by both experienced South Ossetian troops and members of the Russian Airborne Troops. In August 2009 the SOA and Russia reorganized the 4 Air Mobile Brigade, as a joint forces brigade, which would have an active Russian military base in South Ossetia. The Russian Airborne Troops are reported to have established an active military base outside of Java, South Ossetia and are reported to have trained SOA recruits since the summer of 2009.

All uniforms are donated by the Russian Ground Forces, the tri-coloured Flora pattern is standard issue throughout the SOA. It is planned that the SOA will wear a variant of the Ukrainian BDU camouflage.