The Myanmar Navy (Burmese: တပ်မတော် (ရေ); [taʔmədɔ̀ jè]) is the naval warfare branch of the armed forces of Myanmar. With 19,000 personnel on duty, the navy operates more than 125 vessels. Prior to 1988, the navy was small, and its role in counter-insurgency operations was smaller than those of the army and the air force. The navy has since been expanded to take on a more active role in defense of Myanmar's territorial waters.

The naval arm of the Royal Armed Forces consisted mainly of shallow draft river boats. Its primary missions were to control the Irrawaddy River, and to protect the ships carrying the army to the front. The major war boats carried up to 30 musketeers and were armed with 6- or 12-pounder cannon.[1] By the mid-18th century, the navy had acquired a few seafaring ships, manned by European and foreign sailors, that were used to transport the troops in Siamese and Arakanese campaigns.

The Arakanese and the Mon, from maritime regions, maintained more seaworthy flotillas than the inland riverborne "navy" of the Royal Burmese Army.

Founding and the Second World War

The Myanmar Navy was formed as the Navy of Burma in 1940 and, although very small, played an active part in Allied operations against the Japanese during the Second World War. 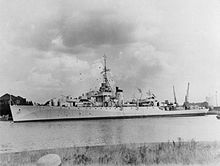 In December 1947, the Union of Burma Navy was formed with 700 men. The fleet initially consisted of a small but diverse collection of ships transferred from the Royal Navy under the arrangements made for Burma's independence in January 1948. It included the UBS Mayu, an ex-Royal Navy River-class frigate, and four Landing Craft Gun (Medium). Armed with two 25-pounder (88 mm) guns and two 2-pounder (44 mm) guns, these landing craft were used as support gunboats.[2]

In 1950 and 1951, the United States provided 10 coast guard cutters (CGC) under the Mutual Defense Assistance Program (MDAP). The Myanmar Navy played an important part in the government's fight against the ethnic and ideological insurgent groups which threatened the Union Government in its early days. The Myanmar Navy performed both defensive and offensive roles, protecting convoys, carrying supplies, ferrying troops and giving much-needed fire support. It was instrumental in relieving the port city of Moulmein, which was captured by Karen insurgents in 1948, and the Irrawaddy Delta town of Bassein. Although one armed patrol boat defected to the Karen insurgents, throughout the turbulent years of post independence in Myanmar, the navy was largely unopposed and maintained control over Myanmar's crucial inland waterways.[3]

Efforts were made to produce locally made naval vessels with assistance from Yugoslavia. In 1960, the Myanmar Navy commissioned two 400-long-ton (410 t) Nawarat-class corvettes. Their armaments include 25-pounder field gun and 40 mm Bofors anti-aircraft gun.[7] Myanmar shipyards also built a number of smaller patrol craft and a number of landing craft. Landing craft and auxiliary ships are usually armed with Oerlikon 20 mm cannons, 40 mm Bofors anti-aircraft guns and heavy machine guns.[8] In the mid-1960s, the Myanmar Navy took delivery of ex-US Navy 640-long-ton (650 t) PCE-827 class[9] corvette and a 650-long-ton (660 t) Admirable-class minesweeper, both of which were commissioned in the mid-1940s.

Although the Myanmar Navy expanded rapidly during the 1950s and 1960s, the navy was unable to keep pace with loss or deterioration of older vessels in the 1970s. In 1978, the United States provided the Myanmar Navy with six small river patrol craft.[10]. A naval replacement program was initiated by BSPP Government in 1979.

In 1980, the Myanmar Navy acquired six Carpentaria-class inshore patrol boats from Australia followed by three 128-ton Swift-type coastal patrol boats from Singapore and three 385-ton Ospery-class offshore patrol vessels built in Denmark. The Ospery and Swift-class boats have a range of 4,500 and 1,800 miles (7,200 and 2,900 km), respectively, and were armed with Oerlikon 20 mm cannons and 40 mm Bofors anti-aircraft guns. In the early years of the 1980s, Myanmar shipyards built three 128-ton PGM type patrol boats based upon US PGM-class patrol boats. Each boat was armed with two 40 mm Bofors anti-aircraft guns and two 12.7 mm heavy machine guns. 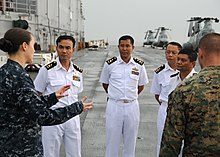 As part of international engagement of the US with the Myanmar's armed forces, the USS Bonhomme Richard (LHD-6) visited Myanmar in early 2013.[12]

The Myanmar Navy has held its annual 'Sea Shield' combined fleet exercise in the Bay of Bengal and the Andaman Sea since 2014. The annual manoeuvres usually involve live-fire exercises by several of the Myanmar Navy's strategic vessels.[13] In 2017, Myanmar's Deputy Defence Minister announced the Myanmar Navy's ambition to acquire a submarine.[14]

When it comes to international navy exercise, Myanmar Navy participated in Indian and Myanmar Navy Exercise 2018, which was held in the Bay of Bengal. On the Myanmar side, vessels included the Kyan Sittha-class frigate UMS Sin Phyu Shin (F-14) and offshore patrol vessel UMS Inle and on the Indian side, vessels included anti-submarine warfare corvette INS Kamorta, Shivalik (Project 17)-class frigate INS Sahyadri, and a Type 877EKM Kilo-class submarine, along with one helicopter and two advanced aircraft.[15] In September 2019, Myanmar Navy's UMS Kyan Sittha participated in the first US-Asean Maritime Exercise (AUMX) to improve disaster management and maritime cooperation in the region.[16]

The Myanmar Navy have had better relationships with Navies in the region in the 2010s than in the previous decades. To promote goodwill between navies, the Myanmar Navy played host to many Navies from the region such as Royal Australian Navy, PLA Navy and Indian Navy.[17][18][19] Likewise, Myanmar naval vessels have made their historic diplomatic visit to a number of countries in the region including Vietnam, Thailand and Singapore.[20][21]

Former and current commanders-in-chief since independence

A navy exercise at Coco Islands

The Myanmar Navy formed a naval infantry battalion of 800 men in 1964, and a second battalion in 1967. Third and fourth battalions may have also been raised. They battalions traditionally are deployed mainly in the Arakan, Tenasserim, and Irrawaddy delta coastal regions primarily to assist in the army's counter-insurgency operations (COIN).

Main article: List of equipment in the Myanmar Navy

The Myanmar Navy is undergoing swift modernisation and expansion. It is gaining larger and more advanced ships of various design, notably constructing them locally with foreign supplied equipment.[26]

The Myanmar Navy started its modernisation program in 2001 in an attempt to replace older ships and equipment. In 2012, the navy took delivery of two Type 053H1-class frigates from China. These two ships were upgraded extensively. Upgrades included the replacing of HY 2 anti-ship missiles by C-802 missiles and installing new sensors. The first indigenous frigate, the Aung Zeya entered service in 2011 and took part in a joint exercise with Indian Navy ships off Visakhapatnam in early 2013. A second ship, Kyan Sittha entered service in 2012 and is the navy's first stealth frigate. The navy plans to build six indigenous frigates; combining Russian, Indian, Chinese, and Western weapons systems. These ships are equipped with Kh-35E anti-ship missiles, OTO Melara 76 mm Super Rapid Cannons, AK-630 6-barrel 30mm close-in weapon system (CIWS) and Chinese ASW rockets and torpedoes. Radars and electronic systems are mainly from Bharat Electronics of India. Myanmar acquired surface-to-air missiles and anti-ship missiles from China for its newly built frigates and OPVs. Myanmar Navy Shipyard which was acquired from China in the late 1990s is one of the most modern shipyards in the region. Many Myanmar naval engineers underwent shipbuilding training in China and Russia.

Twenty 45-metre class FACs (guns and missiles) are the backbone of the navy, but these ships are too small for new weapons and electronic systems. This is the main reason for initiating the 49-metre class FAC (stealth). Older Hainan class FAC (submarine chaser) will be degraded to Category B reserve by 2016.

India is set to hand over Myanmar its first-ever submarine, a Kilo-class boat, likely to be sent across the year 2019 after being refitted indigenously. The Kilo-class submarine—INS Sindhuvir—bought from Russia in the 1980s, is currently being modernised by the Hindustan Shipyard Limited HSL in Vizag, with sources saying that work is likely to be completed before the end of this year. The submarine will be used by the Myanmar Navy for training purposes.[27] The procurement of Indian submarine is said to be India's Act East Policy to counter Chinese military influence in the Bay of Bengal.[28]