In 1972, the regiment's structure was changed, with the infantry, aviation and naval sections split into separate units once again. The infantry companies became the 1st Battalion, Royal Brunei Malay Regiment, with a total of five rifle companies. Three years later, the 2nd Battalion, Royal Brunei Malay Regiment was formed by deamalgamating B and E Companies of the 1st Battalion.[4]

In 9 July 2011, the RBLF conducted trials to replace their DPM BDUs with Digital Disruptive Pattern BDUs under a contract with Force-21 Equipment.[6] 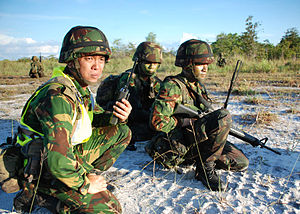 Bruneian soldiers during the CARAT 2010 exercise

The Second Battalion was formed on 2 January 1975 at the Bolkiah Garrison. Before this, the Battalion was comprised Company B and E of the First Battalion under the command of the then Commanding Officer, Lieutenant Colonel A.E. Hibbert. The battalion moved to Tutong Camp on 10 May 1976. Following the formation of the Second Battalion, Pengiran Ratna Indera Lieutenant Colonel Pengiran Dato Setia Ibnu bin Pengiran Datu Penghulu Pengiran Haji Apong was then appointed as the commanding officer in charge.[10]

The rank insignia for commissioned officers for the Royal Brunei Land Forces.

The RBLF uses a mix of imported equipment from various suppliers (mainly British, but French, German, Russian, Indonesian and Ukrainian as well).

Brunei has expressed interest in purchasing between 40 and 50 of the Indonesian/Turkish Harimau/Kaplan medium tank.[29]

Brunei has also shown interest in Russian equipment including:[30][31]

The Royal Brunei Land Forces has significant ties to the British Army, due in no small part to the fact that there is a permanent British garrison in Brunei. Following the Brunei Revolt in 1962, an agreement was signed between Brunei and the United Kingdom that a battalion of Gurkhas would be stationed in the country to protect various British interests, most notably the major oil installations at Seria. The current garrison consists of a battalion of the Royal Gurkha Rifles, plus a flight of helicopters from the Army Air Corps in support. However, Brunei is also used by the British Army in general for training in jungle warfare. The presence of one of the British Army's few significant overseas garrisons provides an opportunity to assist the RBLF in its training.

The RBLF maintains close ties with many other nations, both in the South-East Asia region and elsewhere. The RBLF conducts exercises with the Malaysian Army[32] and the Singapore Army[33] on a regular basis. The RBLF has also conducted regular exercises with the armies of both Australia, China, New Zealand, Philippines and Thailand,[34] while the United States Marine Corps conducts annual Cooperation Afloat Readiness and Training (CARAT) in Brunei.[35]