Caloocan, officially the City of Caloocan (Tagalog: Lungsod ng Caloocan IPA: [kalɔʔokan]), or simply known as Caloocan City, is a 1st class highly urbanized city in Metro Manila, Philippines. According to the 2015 census, it has a population of 1,583,978 people[3] making it the fourth-most populous city in the Philippines.

It is divided into two geographical locations with a total combined area of 5,333.40 hectares. It was formerly part of the Province of Rizal of the Philippines' Southern Luzon Region. The city's name is colloquially spelled as Kalookan. It comprises what is known as the CAMANAVA area along with cities Malabon, Navotas and Valenzuela.

The ammunition train and reserves of the 20th Kansas Volunteers, Col. Frederick R. Funston, marching through Caloocan at night after the battle of February 10.

Originally, Caloocan was a lowland area located on the corner where the old town of Tondo and Tambobong meet. Caloocan became a municipality when it was separated from Tondo in 1815. Its original territory was extended to Marikina, San Mateo and Montalban to the east; Tinajeros, Tanza and Tala rivers to the north; San Francisco del Monte, Sampalok, Santa Cruz and Tondo in the south; and Dagat-dagatan and Aromahan to the west.[5]

The city is historically significant because it was the center of activities for the Katipunan, the secret militant society that launched the Philippine Revolution during the Spanish occupation of the Philippines. In a house in Caloocan secret meetings were held by Andrés Bonifacio and his men, and it was in the city's perimeters where the first armed encounter took place between the Katipunan and the Spaniards. The revolution erupted after the Cry of Balintawak led by Andres Bonifacio

In 1901, during the formation of the province of Rizal, Caloocan was included in its matrix. Novaliches became part of Caloocan pursuant to Act 942, as amended by Act 984 and Act 1008 of the Philippine Commission, which was transferred in 1949 for the formation of Quezon City.

In 1961, after Republic Act No. 3278 was approved by the Philippine Congress and the plebiscite was conducted. Caloocan was officially inducted into cityhood on February 16, 1962

Caloocan once encompassed a much larger, contiguous area. The districts of Balintawak, La Loma and Novaliches were once part of Caloocan. Balintawak is a historic district because it was the original site of the "Cry of Pugad Lawin" (Unang Sigaw sa Balintawak) at a location called "Kang-kong" near Tandang Sora's house. Novaliches was an expansive sector with some hillsides that served as meeting places and hideouts for Andrés Bonifacio and the Katipunan.

By the 1920s there was a consolidation of several municipalities. Caloocan annexed the neighbouring town of Novaliches, as stated in the Act 942, as amended by Acts 984 and 1008 of the Philippine Commission, bringing its total area to about 15,000 hectares. It extended to the foothills of Marikina, San Mateo and Montalban in the east; Tinajeros, Tanza and Tala rivers in the north; San Francisco del Monte, Sampalok, Santa Cruz and Tondo in the south; and Dagat-Dagatan or Aromahan in the west.

When Quezon City was created in 1939, Caloocan ceded 1,500 hectares of land from the barrios or sitios of Balintawák, Balingasa, Kaingin, Kangkong, La Loma, Malamig, Matalahib, Masambong, Galas, San Isidro, San José, Santol and Tatalon. Instead of opposing the transfer, Caloocan residents willingly gave the land in the belief it will benefit the country's new capital city.

However, in 1949, Congress passed Republic Act No. 333, which redefined the Caloocan-Quezon City boundary. The barrios of Baesa, Talipapâ, San Bartolomé, Pasong Tamó, Novaliches, Banlat, Kabuyao, Pugad Lawin, Bagbag, Pasong Putik, which once belonged to Novaliches and had an area of about 8,100 hectares, were excised from Caloocan. The remaining portion of the Novaliches is now called North Caloocan. This split Caloocan into two parts: a southern section that is more urbanised, and a northern section that became suburban-rural.

Caloocan is divided into two non-contiguous areas. Southern Caloocan lies directly north of the Manila and is bounded by Malabon and Valenzuela to the north and west, Navotas to the west, and Quezon City to the east. Northern Caloocan is the northernmost territory of Metro Manila which most residents call Novaliches or Fairview; it lies east of Valenzuela, north of Quezon City, and south of San Jose del Monte, Meycauayan and Marilao in the province of Bulacan. Caloocan's northern part is much larger than its southern half.

Caloocan is divided into 188 barangays. The city uses a hybrid system for its barangays. All barangays have their corresponding numbers but only a few — mostly in the northern part — have corresponding names. However, names of barrios and districts do not necessarily coincide with barangay perimeters. Barangays in southern Caloocan are smaller compared to their northern counterparts.

Among the cities in Metro Manila, only Manila, Pasay and Caloocan implement the so-called "Zone Systems". A zone is a group of barangays in a district. Although a zone is considered a subdivision in the local government units, the people do not elect a leader for the zone in a popular election similar to the normal barangay or local elections. The zoning system is merely for statistical purposes. Caloocan has 16 zones. The biggest zone in Caloocan is Zone 15 in District 1 (North Caloocan) directly west of the second biggest zone in Caloocan which is Zone 16.

Barangay Bagong Silang (176) is the most populous barangay in the entire country with a population of 246,515 people.[3]

In 1957, the sitio of Bagbagin was separated from the barrio of Kaybiga and converted into a distinct barrio known as barrio Bagbagin.[6]

In 1989, Republic Act 6714 called for reducing the seventy (70) barangays constituting the first congressional district of Caloocan City to only thirty (30) barangays. It was presumably defeated in the plebiscite that followed.[7]

Of the country's 238 legislative districts (LDs), the First LD of Caloocan was the biggest in terms of population size, with 1.19 million persons.[30]

Most residents speak both Filipino and English, with considerable numbers speaking other languages and dialects.

Like many other places in the country, Roman Catholicism is the predominant religion. There is a significant presence of Iglesia ni Cristo and other Protestant churches like Church of God Caloocan located at Baesa, Caloocan City.

Caloocan's 10th Avenue area is well known for the clusters of motorcycle dealers and motorcycle spare parts dealers. Among the major and famous streets are P. Zamora Street and A. Mabini Street.

Numerous banks have branches in the city such as Banco de Oro, East West Bank, MetroBank, Maybank, Chinabank, Bank of the Philippine Islands, Our Lady of Grace Credit Cooperative, etc.

The city also has a number of shopping malls and stand-alone supermarkets and hypermarkets including the former Ever Gotesco Grand Central (and future SM City Grand Central), Puregold Maypajo, Monumento and Caloocan, Victory Central Mall, Puregold Monumento, Araneta Square, Uniwide Warehouse Club Monumento, SM Hypermarket Monumento, and SM Center Sangandaan which are in Monumento area in the south. In the north, there are two shopping malls serving the residents of Bagong Silang and Camarin, namely, Zabarte Town Center, Holiday Island Mall and Metroplaza Mall. Savemore Market have three branches which are located in Kiko Camarin in Barangay 178 (Kiko Camarin), Zabarte inside Zabarte Town Center, Kaybiga and Primark Deparo. Puregold Price Club also opened three branches in North Caloocan which are located in Zabarte, Bagong Silang and Deparo. In 2017, Primark Town Center Deparo started to serve the residents of Deparo and the nearby barangays of Bagumbong and Llano. 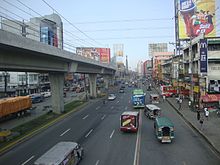 The north end of EDSA in Caloocan

The Balintawak Toll Barrier of the North Luzon Expressway.

The Line 1 has a terminal at Monumento that passes through the city's 5th Avenue LRT Station. The railway traverses Rizal Avenue Extension and enters the City of Manila and Pasay City. The stretch can be traveled in about 30 minutes. Philippine National Railways also has a line, with its terminal at Samson Road, and passes through Caloocan railway station, 10th Avenue railway station, and 5th Avenue railway station. The currently under construction Line 7 had also proposed two stations located at the northern part of Caloocan that will be passing at Sacred Heart and Tala.

The city has an extensive network of roads, the most prominent being Epifanio de los Santos Avenue, which begins in the Monumento area. The North Luzon Expressway's Operations and Maintenance Center and the motorway's Balintawak Toll Barrier are in Caloocan.

Bus line Victory Liner Incorporated has its headquarters and terminal along in Rizal Avenue Extension near the Monumento Station.

The city's most celebrated landmark is the monument to the revolutionary Andrés Bonifacio, which stands on a roundabout at the northern terminus of EDSA. The memorial was erected in 1933, and consists of an obelisk with sculptures by National Artist Guillermo Tolentino. The monument marks the very first battle of the Philippine Revolution on 3 August 1896.

Recent renovations have been made on the environs of the monument, including the Bonifacio Circle, its former site, and the Caloocan stretch of EDSA, which is 100 metres away from the landmark. The whole area is known as 'Monumento'.

South City hall stands in a rectangular lot bordered by 8th and 9th Streets and 8th and 9th Avenues in the southern part of the city. The second old south city hall stands today at A. Mabini Street across from San Roque Parish Cathedral. There is also the North City hall serving the northern part of the city. The city's District Office of the Bureau of Internal Revenue is along EDSA.

The whole Caloocan City police force was recently sacked after a series of crimes, including killings and robberies, were committed by its members. However, instead of dismissing the erring police officers, they were scheduled to be retrained by Former PNP Chief and now Senator Ronald dela Rosa.