Dagon University (Burmese: ဒဂုံ တက္ကသိုလ် [dəɡòʊɴ tɛʔkəθò]), located in North Dagon, Yangon, is one of the largest universities in Myanmar. The university, established in 1993, offers bachelor's and master's degrees in liberal arts and sciences to full-time, part-time and online students. Dagon University also offers a full-time four-year law degree program. The university's 1,582-acre (6.40 km2) campus in the outskirts of Yangon is one of the largest campuses in the country.[1]

Dagon University was opened in 1993 in North Dagon in the northeastern corner of Yangon to serve students from eastern Yangon districts. The move was widely believed to be part of the Burmese military government's plan to disperse university students across many universities and colleges around the country. Students who would have attended Yangon University now have to attend Dagon University or East Yangon University in Thanlyin, southeast of Yangon.[2]

The university and all other arts and science universities in the country were closed down from December 1996 to July 2000, following student demonstrations in Yangon.[2] 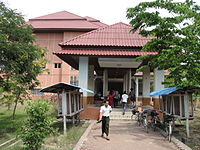