Dawei (Burmese: ထားဝယ်; MLCTS: hta: wai, pronounced [dəwɛ̀]; Mon: ဓဝဲါ, pronounced [həwài]; Thai: ทวาย, RTGS: thawai, pronounced [tʰā.wāːj]; formerly known as Tavoy) is a city in south-eastern Myanmar and is the capital of the Tanintharyi Region, formerly known as the Tenasserim Division, about 614.3 km (381.7 mi) south of Yangon on the northern bank of the Dawei River. Population (2004 estimate) is 139,900. Dawei is a port at the head of the Dawei River estuary, 30 km (18.6 mi). from the Andaman Sea. As a result, the city is prone to flooding during the monsoon season. "Dawei" is also the name of one of Myanmar's 135 ethnic minorities.

Dawei derives from the Mon language term hawai (Mon: ထဝဲါ; /həwai/), which means 'to sit cross-legged', in reference to the Buddha's sitting posture on the palin (throne).[2][3]

The area around the Dawei River estuary has been inhabited for centuries by , Mon, Kayin, and Thai mariners.

As the ancient site, Sagara City, old Dawei, which is approx 6 miles north of present city, has so many traces of Pyu Culture, it was recognized as one of the province capital in ancient Pyu era.

From the 11th to 13th centuries, Dawei was part of the Pagan Empire. From 1287 to 1564, Dawei became part of the Sukhothai Kingdom and its successor Ayutthaya Kingdom (Siam). From 1564 to 1594, Dawei was part of the Toungoo Kingdom of Burma. Siam temporarily regained the city between 1594 and 1614. From 1614 to the 1740s, Dawei was the southernmost city under Burmese authority, and was defended by a Burmese garrison. In the late-1740s, during the Burmese civil war of 1740–1757, Dawei, along with the northern Tenasserim coast, was taken over by Siam. Burma regained the city in 1760, and extended its control over the entire Tenasserim coast in 1765. The Tenasserim coast was ceded to the British after the First Anglo-Burmese War (1824–1826).

After independence in 1948, the city became part of the Tenasserim Division, which also included today's Mon State. In 1974, Mon State was carved out of Tenasserim and Dawei became the capital of the truncated division. In 1989, the city's English name was changed from Tavoy to Dawei, and Tenasserim became Tanintharyi.

Dawei features an extreme tropical monsoon climate (Köppen climate classification Am), similar to Sittwe further north-west. There is a substantial dry season from November to March, but in the wet season the influence of local mountains causes Dawei to receive as much as 1,300 millimetres (51 in) precipitation per month. Apart from the Chocó region of Colombia, and the area around Mount Cameroon in Africa, it is possibly the wettest lowland tropical region in the world. 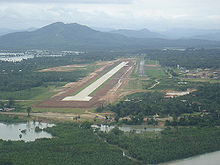 Only recently was Dawei connected to the rest of Myanmar by road and rail. A transnational highway and a railway line across the Tenasserim Hills connecting Dawei and Bangkok[6] are planned if a proposed deep water port project goes ahead.[7] This port could significantly reduce Singapore-bound traffic when completed.[8]

The airport serves as the domestic airport for the city of Dawei and the neighbouring towns. The government plans to upgrade the air port for the hub of tourism.

It is the southernmost station and termination in Myanmar.

There are plans to construct a deep water port in Dawei.[9] In November 2010, the Myanmar Port Authority signed a US$8.6 billion deal with Italian-Thai Development to develop the seaport at Dawei.[10] The Dawei Special Economic Zone would become Myanmar's first special economic zone (SEZ), which includes plans to develop a 250 square kilometres (97 sq mi) industrial estate, with sea, land (railway and road) infrastructure links to Thailand, Cambodia, and Vietnam, as well as a gas pipeline to Thailand's Kanchanaburi Province and commercial and residential developments.[11][12]

Dawei longyis (sarong) are one of the area's well-known products.[14] The area produces rubber, dried fish, and teakwood. It also produces cashew nuts and betel nuts and exports them through local traders to China, India, and Thailand. Dawei is also known for its variety of tropical fruits such as pineapples, a variety of mangoes, mangosteens, and durian. There is one fruit called zin thi (in Dawei language), which can only be found in Dawei and surrounding areas; this fruit is sweet with a touch of sour.