Depok word is an acronym of De Eerste Protestantse Organisatie van Christenen (Indonesian: Organisasi Kristen Protestan Pertama, English: First Protestant Christian Organization).[2][3] There is also a saying that the word "depok" itself comes from Sundanese meaning hermitage or abode of one living in seclusion.[4]

On 18 May 1696, a former VOC officer Cornelis Chastelein bought the land with an area of 12.44 km2, 6.2% the area of today's Depok. Besides cultivating the area with industrial plants with the help of the locals, Chastelein was active as a missionary, preaching Christianity to the indigenous Indonesians. To this end, he established a local congregation named De Eerste Protestante Organisatie van Christenen (DEPOC).[2][3] Although the Sundanese name Depok, meaning hermitage or abode of one living in seclusion, was already in existence before the establishment of the congregation, some[who?] insist the acronym might have been the origin of the city's name. Today majority of Depok's population are adherent to Islam, except for the majority of the original Depok family.

Before his death on June 28, 1714, Chastelein had written a will that freed the slave families of Depok and gave them pieces of his land, converting slaves into landlords. In 1714, the 12 slave families became landlords (forever as given to them with entitlement deeds of the owner Chastelien in his will) and freed men, women, and children. The freed slaves are also referred to as the Mardijker's – the word Merdeka meaning freedom in Bahasa Indonesia. June 28 is designated as Depokse Daag (Depok Day) by the original Depok family, and on June 28, 2014, 300 years of commemoration, they formally opened a 3-meter height monument on its own land, but it was prohibited by the Government as it referred to Dutch colonialization.[5]

The 12 original Depok family names are:[6]

The original slave families of Depok are of Balinese, Ambonese, Buginese, Sundanese and Portuguese Indo, i.e., Mestizo and Mardijker descent. Isakh, Jacob, Jonathans, Joseph, and Samuel were family names baptized by Chastelein after the slave families converted to Protestant Christianity. The other families retained their original names and might have been (Roman Catholic) Christian already before joining Chastelein's Protestant church. Descendants of the original Depok families with the exception of the Sadokh family, still live in Indonesia, the Netherlands, Canada and the United States.[7][6]

In 1871, the colonial government gave Depok a special status allowing the area to form its own government and president. The ruling no longer stood after 1952, where the Depok presidency ceded its control of Depok to the Indonesian government except for a few areas.

During the Bersiap (Indonesian civil war and war for independence from The Netherlands) period of 1945 much of Depok was destroyed and many of its inhabitants killed by 'Pemuda'.[8] Many of the original Depok families fled for their lives from Indonesia during the Indonesian revolution and now live in the Netherlands as part of the Indo community there.[9]

In March 1982, Depok was reclassified as an administrative city within Bogor Regency and, in 1999, as a city headed by a mayor. Then on 20 April 1999, the city of Depok was unified with some neighbouring districts of Bogor Regency to form an autonomous city of Depok (independent of the Regency) with an area of 200.29 km2.[10] This date is commemorated as a date of the establishment of the city. 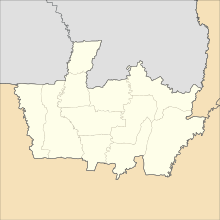 Depok is divided into eleven districts (kecamatan), tabulated below with their 2010 Census population.

Alun Alun Deopk or Depok Square is equipped with various sports facilities such as a basketball court, futsal, skateboard, wall climbing, BMX arena, children's playground, fish pond, fountain, and others.[14]Godongijo Conservation and Education Park is located in Depok. The park provides children and teachers alike the ability to get up close and personal with nature. There are also other children's amusement parks in the city such as Depok Fantasi Waterpark, Taman Pemuda Pratama, Pondok Zidane etc. 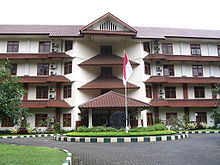 The following universities are in Depok: 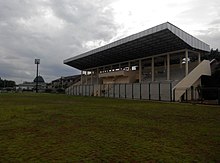 Depok is the home town of the Persikad Depok and football team who currently plays in the Liga 2.

Depok is twinned with: